Pia Marais made her feature debut with “The Unpolished“, which was screened at many international film festivals and won various prizes, including Rotterdam’s Tiger Award in 2007. Her second feature film “At Ellen‘s age“, was developed at the Résidence du Festival de Cannes and premiered at the International Competition in Locarno Film Festival in 2010, followed by many other international festivals, “Layla Fourie” is set in South Africa and won a Special Mention in the Competition at the Berlin International Film Festival 2013. 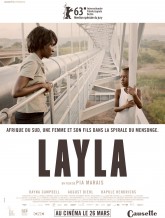